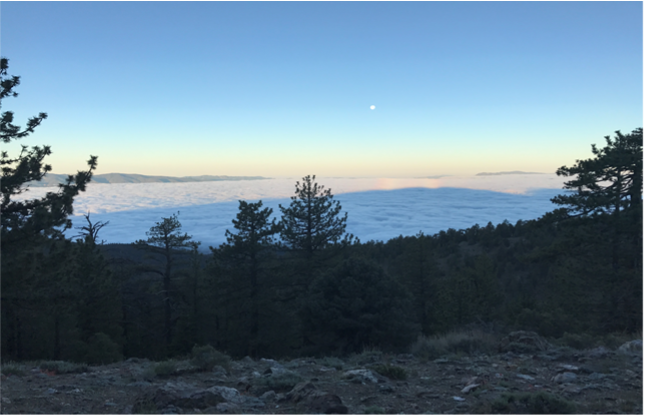 01 Jul In The Chumash Wilderness

Posted at 11:02h in Updates by experiacreative

In The Chumash Wilderness

The highest peaks near the confluence of Santa Barbara, Ventura, and Kern Counties form the ridge of Mount Abel, Grouse Mountain, Sawmill Mountain, and Mount Piños.  From June 8th through 11th this year, a group of Allen & Kimbell attorneys, along with friends and family, explored those peaks.

John Parke organized the adventure, and was joined by Charles “Kim” Kimbell, James Sweeney and Joseph Billings.  John’s son Will Parke accompanied these lawyers, along with friends Michael Benedict, Peter Schuyler, and Peter’s wife Lisa Stratton.  Joe’s brother Sam Billings rounded out the humans.  The expedition would not have been complete without John’s Great Pyrenees Porthos, a 22 month old male with boundless energy.  Porthos carried a pack like everyone else. 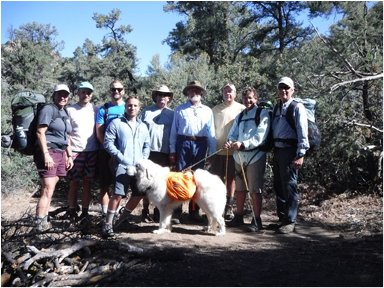 After Joe finished a deposition on the morning of Thursday the 8th, he, Will, Sam and James headed for the first night’s rendezvous – car camping at the top of Mount Abel, elevation 8,300’.  The route was past Ojai, up highway 33, over Pine Mountain summit, and down into the Cuyama Valley to Quatal Canyon Road.  This group first met Peter and Lisa in Quatal Canyon, although without realizing it.  A few miles along the dirt road, they passed a couple who were stopped to inspect some unique plant life.  This should have been no surprise, as Peter and Lisa are both expert botanists.  In fact, Peter is currently serving as President of the Board of Trustees of the Santa Barbara Botanic Gardens.  With botanic specialist Michael Benedict – of the Sanford & Benedict Vineyard – also joining the party, the flora of the Chumash Wilderness held few mysteries.  Much genus and species type latin was thrown around over the course of the weekend.

Continuing to the top of Abel, the first group met John and Porthos.  Lisa and Peter arrived presently, followed by Kim and Michael.  Everyone feasted that Thursday night, knowing that for the next few days the meals would be freeze dried.

After breaking camp the next morning, we drove a mile or so to park at the trail head.  The first part of the trail not only headed straight south, it also seemed to head straight down, losing about 600’ of elevation in just over a half mile.  Two days later, of course, the final hike up and out would end on this steep pitch.  Friday morning, though, heading back up to the ridge at Grouse Mountain, the 600’ was regained over a more leisurely mile and a half.  The goal was Sheep Camp, which has one of the few springs in the area, and is just a mile or so from where the trail, bearing south and east, regains the ridge.  Like the first night’s camp on Abel, Sheep Camp is also located at around 8,300’.  Even though it was June, the weather report for these elevations called for cold.  But as it turned out, the temperature the first two nights stayed in the balmy mid-40s.

After setting up at Sheep Camp, six of us headed east for a day hike to the highest peaks, Sawmill and Mt. Piños, both of which top out at just over 8,800’.  Kim and James were satisfied with reaching the top of Sawmill, since dropping down into the saddle between Sawmill and Piños, and then summiting Piños, and then coming back, would effectively double the total vertical climb for that first day on the trail.  But Lisa, Sam, Joe and Will were undeterred, and pushed on to the top.  Those four climbed all four peaks in the range.  Lisa especially is an amazingly strong hiker. 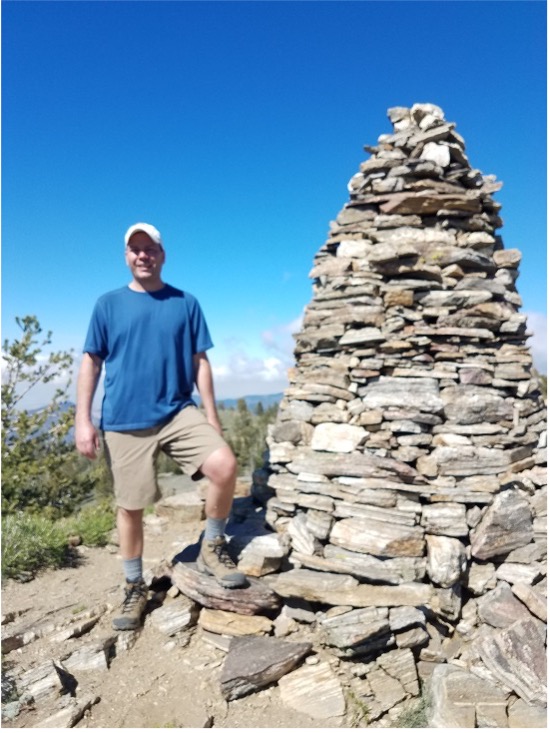 Friday brought a descent.  The first segment took us from Sheep Camp back up north and west to the ridge, and then dropped back down the north side of the ridge to a fork in the trail.  Continue heading north and uphill from that junction, and we would return to the cars.  Head west and down, and the trail would take us to our destination at Mesa Springs camp, another one of the few local water sources.

Sometimes, downhill is more challenging (i.e., painful) than uphill.  It’s especially hard on the feet, but eventually everyone made it down to Mesa Springs at an elevation of 6,000’.  Mesa Springs lies near the northeast edge of San Emigdio Mesa, which in turn starts around the northeast end of Apache Canyon.   The Mesa is covered partially with pinyon pine and juniper woodland, and partially with one of the largest high-elevation meadows in this part of the state. 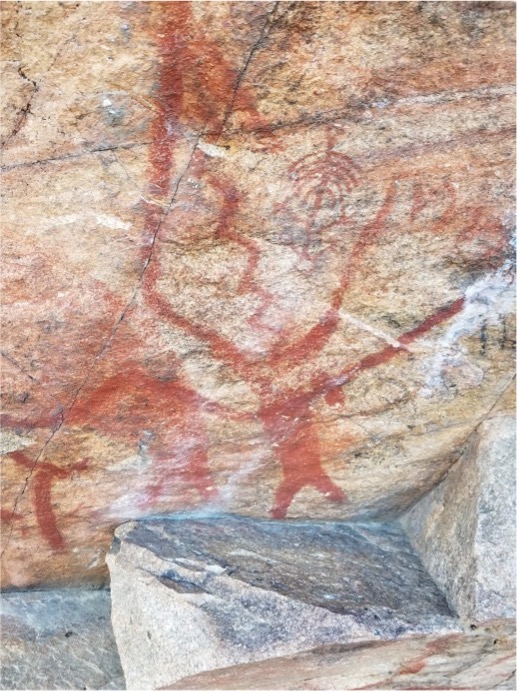 Chumash pictographs that we found near San Emigdio Mesa

The views to the south and west, back toward Pine Mountain (not to be confused with Mt. Piños) and Big Pine, were stunning.  This was especially true in the very early morning (taking John’s word for it), when a layer of clouds covered the Mesa, illuminated by both the rising sun and the setting full moon.

Saturday night finally lived up to the weather reports, and we woke to patches of frost.  Apparently, lower elevations aren’t always warmer.  At least the low temperatures got everyone up early and near the campfire, where we planned the final day.  There were two possibilities:  back up the way we had come about 2,300 vertical feet to the vehicles, or out on the trail to the Toad Springs camp at the top of Quatal Canyon Road.  Anyone who walked out that way could be picked up by the others on the drive back.  We knew a portion of the trail to Toad Springs had been washed out, and overall the route contained many rises and falls, but the allure of seeing a new stretch of country won out for five of us.  The other four chose the steep climb back up to Mount Abel – rather bearing those ills we had, than flying to others that we knew not of.

Several hours later, miraculously, we actually reunited at Toad Springs.  The only one who missed the celebration of cold beer and watermelon prior to the final drive home was John Parke, who had arranged the entire trip.  John couldn’t wait around after hiking back up to his car at Abel.  He had to be in LA Superior Court first thing Monday morning to deliver closing arguments in an ongoing trial.  Fortunately, there’s nothing like a few days away from it all to organize your thoughts.